Life’s biological integrity is sacred.
—
Earth’s life forms are not “machines” to be subjected to patenting by corporations or other entities.
—
The public must have access to clear and accurate information about the science and use of biotechnology.
—
Crucial decisions about the genetic alteration of life, including our food supply, should be made democratically.

THE FUTURE OF FOOD and, indeed, much of the natural world may well depend on how society addresses the challenges of biotechnology. Understanding genetic engineering and its implications for agriculture and society is a critical step in assessing the acceptability of this technology. Below is a brief description of agricultural biotechnology and its risks.

WHAT IS AGRICULTURAL BIOTECHNOLOGY ?

OVER THE 10,000 YEARS of its history, agriculture has been using selective breeding of plants and animals. During the last hundred years, these practices reached their height with the increasingly widespread use of hybridization. And in the last two decades, we have seen the development of biotechnology and its increasing application in food production. The use of genetic engineering in agriculture is fundamentally different from even the most radical techniques of selective breeders. Bioengineering uses bacteria and viruses to force the invasion of a gene from one kind of organism into the genetic makeup of an organism of another kind, often crossing the barriers of species, of genus, of phylum— barriers heretofore protected by nature. Researchers have engineered human growth genes into fish and livestock to make them grow larger and faster, fish genes into tomatoes so that they can grow and be stored at lower temperatures, and bacterial genes into plants for pest resistance. This forcible invasion into the inheritance structures of life entails risks that evolutionary processes have through their whole history been powerfully structured to avoid. This process challenges nothing less than the genetic integrity of the entire biotic community.

WHAT ARE THE THREATS POSED BY BIOTECHNOLOGY IN AGRICULTURE?

A LARGE PERCENTAGE of some major U.S. crops (e.g., corn, soybeans) have already been genetically engineered, are now being planted, and their products consumed as food. Yet our government neither recognizes the inherent risks of these plants, nor the public’s right to know. Therefore, it has failed to require labeling or mandatory human health or environmental safety testing of these foods. The environmental threats of biotechnology in agriculture stem from the release of genetically engineered organisms into the environment.

Currently, trillions of genetically engineered microbes and plants have been released into the natural world. Once released, each of these plants or bacteria can become a form of “living pollution” that will grow, reproduce, mutate, and widely disseminate. Because they are alive and self-propagating, these living pollutants cannot be controlled or recalled. They are virtually impossible to eradicate once let loose in the world. Moreover, individual genes engineered into these plants can “jump” from gene-altered plants into other non-genetically engineered plant species, wreaking ecological havoc.

We already know of several examples of biological pollution brought about by agricultural biotechnology. Independent university studies have shown that the release of only a few genetically engineered fish into open waters can result in the complete extinction of native species. In Canada, herbicide resistant genes have jumped from canola crops into weedy relatives, creating new herbicide resistant “superweeds” which will be impossible to eradicate. Genetically engineered corn has significantly contaminated organic seed stocks throughout the U.S. and has even contaminated heritage varieties preserved in Mexico. Given these and other current examples, it is clear that if the release of genetically engineered organisms is not halted, the resulting biological and chemical pollution could seriously and irrevocably threaten the balance of the earth’s living systems.

As for human health threats, scientists at the U.S. Food and Drug Administration have cautioned that genetic engineering can make currently safe foods toxic, lower nutrition in food, increase resistance to antibiotics, and create other long-term health impacts including the undermining of the human immune system. A major additional area of concern is the potential of genetically engineered food to create new allergens in foods. Recently, genetically engineered corn illegally sold as human food was found to contain a new potential human allergen. This tainted corn contaminated a large amount of non-genetically engineered corn and triggered one of the largest recalls of food in recent U.S. history.

The threats to nature and society presented by genetic engineering are due largely to the technology’s reliance on flawed and outmoded science, to its submission to corporate control, and to the drive to precipitous commercialization of this technology fueled by the patenting of life. Therefore, the CornerStone Campaign (CSC) is initiating and funding efforts to help ensure that the applications of modern biology are based in sound science and do not harm the environment through irreversible biological pollution. CSC is committed to eliminating corporate control over agriculture and to ensuring that corporations not be permitted to control the seeds and food supply of the earth through patent ownership of life forms. The drive for corporate profit cannot be allowed to foster and control a technology which threatens human health and the balance of nature upon which all living things depend. 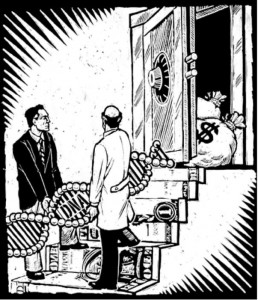 We believe, therefore, that biological pollution, unsound science, patenting of life and corporate control are the cornerstone issues underlying the dangers of agricultural biotechnology, and that these dangers must be confronted in order to assess the acceptability of this technology.