AS WE CONTINUE the difficult task of trying to control and eliminate a multitude of chemical environmental pollutants, from pesticides to global warming gases, corporations using genetic engineering are imposing a new form of pollution on us—biological pollution caused by the release of gene-altered microbes, plants and animals into the environment. This biological pollution presents fundamentally different problems than chemical pollution. Chemical contamination whether an oil spill or factory exhaust, while harmful to human health and the natural world, generally becomes diluted and less concentrated over time.

By contrast, the biological contamination fostered by genetic engineering increases over time as the polluting organism reproduces, disseminates and mutates. While not all genetically engineered plants or microbes will cause immediate or obvious harm, each of these life forms has been genetically manipulated to be novel, to be unlike any ever seen before on earth. Moreover, the corporations creating and releasing these novel organisms have done little or no long term environmental testing, and our government has not passed any laws restricting the use or commercialization of these potential living pollutants. Therefore, each release of a genetically engineered organism represents a dangerous game of ecological roulette, since the engineered bacteria, plant or animal could bring with it permanent, large scale and irreversible environmental harm. Research has already shown that current genetically engineered crops have contaminated organic and other genetically engineered free crops, created “superweeds” almost impossible to eradicate, and seriously harmed a number of insect and bird wildlife species. Scientists also warn that the pending release of genetically engineered fish could make native species extinct in just a few generations. 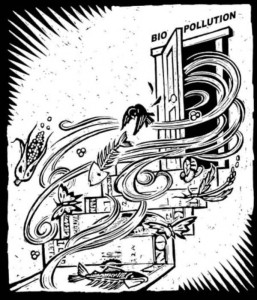 “Each release of a genetically engineered organism represents a dangerous game of ecological roulette, since the engineered bacteria, plant or animal could bring with it permanent and large scale environmental harm.”