This increasing corporate control over our food is having disastrous impacts on farmers and the biodiversity of seeds. Over the last decades corporate takeovers have contributed to the loss of more than five million farms in the U.S. alone. Large corporate farms have cornered national and international markets so that now less than two percent of U.S. farms currently account for more than half of agricultural sales.

Under corporate control the diversity of our crops is disappearing as quickly as our farm communities. Agribusiness continues to promote a few profitable hybrid or genetically engineered seeds and discards virtually all native seed varieties. As a result, more than three-quarters of genetic diversity in agriculture has been lost over the last century. The genetic engineering of crops, which fosters the attempt by corporations to control the permanent biology of plants in order to make them more profitable, is leading to a new level of corporate control of our food and farm communities. 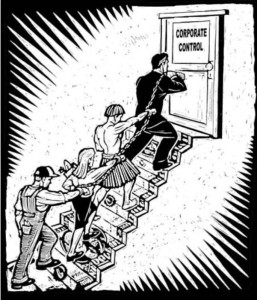 “The increasing corporate control over the world’s seeds is having disastrous impacts on farmers and the biodiversity of crops around the world. The genetic engineering of plants is leading to a new level of corporate control of our farm communities and our food.”